​The JP95 John Petrucci Cry Baby® Wah provides unprecedented tonal tweakability. With its huge and expressive sound, this pedal is the culmination of legendary shredder John Petrucci’s years-long quest to hone and fine-tune his perfect wah sound. John sat down with us to talk about the tonechasing that led to the JP95’s creation as well as his introduction to the wah effect and how it fits into his songwriting process. Check it out.

How were you introduced to the wah, and who influenced your use of it?

John Petrucci: My introduction to the wah was gradual. I kept hearing it on all these songs, and I couldn’t help wanting to find out what it was when I was learning to play as a teenager. At that time, I was a big fan of Iron Maiden, and I’d listen to how Dave Murray used the wah.

But it was Joe Satriani’s Surfing with the Alien that really changed everything for me, though. The way that he uses it as an extension of the expression of his playing, and the way he shapes the notes to make them envelope or be more mellow or more open or sustain or get feedback—that’s probably the biggest influence on the way that I use the wah today.

How do you incorporate the wah into your own playing?

JP: Using the Cry Baby Wah is like bending, or sliding, or using vibrato on your guitar. It’s a way to add more expression and dynamics to what you’re playing. If you get the hang of it, you can really control where the note blossoms. Generally, I use that expressive character to shape my leads, but there are certain situation where it does become an integral component of the songwriting.

The combination of playing hard, playing fast, and stepping on the wah really sets the whole thing on fire.

I remember when the 535Q first came out, with the adjustable Q and frequency range, when we were writing the Scenes from Memory album. I dialed in the perfect sound with that pedal, one I’d never really heard before. We wrote this song “Home,” which has this big wah riff to it. The wah simply accentuates the riff, but it created a unique sound that’s crucial to the impact of the song. If you play that riff without the wah, it just doesn’t sound the same.

Another way I like to use my Cry Baby Wah is to take an aggressive lick to the next level, opening up the notes and getting them to scream and feedback. The combination of playing hard, playing fast, and stepping on the wah really sets the whole thing on fire.

How did you refine your Cry Baby sound over the years?

JP: I’ve tried many different wahs over the years, all of them Dunlop Cry Baby Wahs—I’ve never played anything else. It was the 535Q that really got me fine-tuning and honing my Cry Baby sound. I had never heard that kind of depth in a wah before, and I was immediately able to lock into a sound that I knew I would use a lot.

But because of the types of venues we play, I try to put any front end pedals in the rig and then manage them onstage with a controller. That way, the audio signal only travels a short distance. That’s how I got turned on to the Cry Baby Rack Wah. It has so many options, and that allowed me to dial in the same sound I was getting with the 535Q. I never changed it after that.

How did the JP95 come about?

JP: When I step on a wah and it has my name on it, I want it to be the sound that I use. When you take it out of the box, plug it in, and step on it, you know it’s going to be the sound that I cultivated throughout over the years. The same boost level, the same tonality, the same sweep—no options to get lost in. That was the focus for developing this Cry Baby Wah.

So we started with the settings on the Cry Baby Rack Wah. Since we’ve been in the studio, Dream Theater engineer Rich Chycki—who has a great ear—helped me fine tune it a little bit more to get it even more hi-fi and bring it to the next level. It sounds huge and badass like an angry, screaming monster with the ultimate expressive range—it‘s perfect for shaping single notes or manipulating growling, heavy chords. 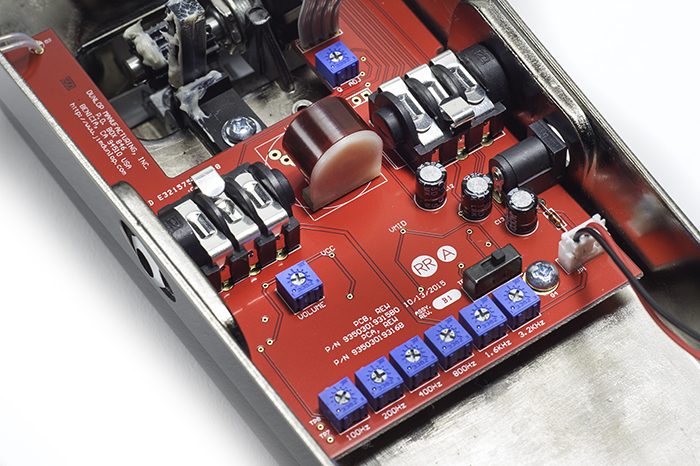 What can you tell us about the JP95’s features?

JP: If you’re a tinkerer and you want to hone your own Cry Baby sound just like I did with the Cry Baby Rack Wah, this pedal has all the controls you need to do that. Just take off the bottomplate, and you’ll find the same controls the Rack Wah has—Volume, Q, and six different EQ controls to boost or cut a whole range of frequencies from 100Hz to 3.2KHz. Since it’s all on the inside, you don’t have to worry about it if you don’t want to.

As far as the look goes, I wanted the pedal to have a classy look but also appear very strong, badass, and sleek.

We also added LEDs because I always have an issue knowing whether or not the wah is on. There are blue lights on the sides that create a glow around your foot so you know for sure that the wah pedal is in fact on.

As far as the look goes, I wanted the pedal to have a classy look but also appear very strong, badass, and sleek. The smoked chrome and shield tread give me that. This pedal has a really cool look to it, on the pedal board and on its own.